A collection of some of the most interesting places to visit and things to do on your Fethiye holiday.

Once you have booked your Fethiye hotel here is an abundance of things to see and do in and around Fethiye. Here are just a few ideas for you to consider: 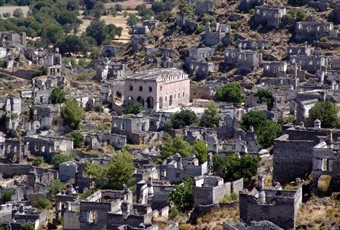 Built in the 18th century, and originally called "Karmylassos", the settlement was by the 20th century home to approximately 20,000 Greek orthodox residents. The collapse of the Ottoman Empire resulted in the land grabs of the Greco-Turkish war between 1919 and 1922.

The resounding Greek defeat in this war ended with violence and retribution, which was often aimed at the remaining Greek Orthodox community within the new Turkish borders, and in turn, against the Muslim Turks in Greece. Hundreds of thousands of Greeks fled the violence in Turkey, which led the governments to agree to a mutual compulsory population exchange starting in 1923 in order to staunch the bloodshed.

The residents of Kayakoy, who had lived peacefully with their Turkish neighbours, abandoned the town and went to Greece, which struggled to find places for almost 200,000 refugees. Around 300,000 Turks were removed from Greece by force to a war-ravaged Turkey in exchange. Norwegian scientist Fridtjof Nansen, the Nobel Prize winner and polar explorer was tasked with organising the exchange.

In Kayakoy, around 360 homes now sit abandoned, empty and on the whole roofless, along with two Greek Orthodox churches and the fountains and cisterns that provided water for the city. Hard winters and strong winds have reduced the buildings to ruins, making the town look older than it is. An interesting museum on the site tells the story of the town. 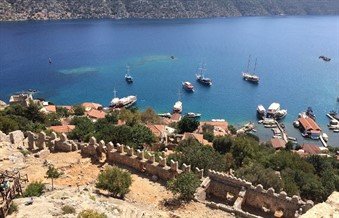 Many of our guests tell us that their favourite experience on holiday in Turkey is a day spent on a Turkish Gulet, exploring the bays and beaches of Turkey's Mediterranean coastline. Gulets of different sizes line Fethiye harbour, and many offer a number of itineraries either on a day trip, or private charter arrangement. Competition means that prices are incredibly reasonable, particularly when you consider that most trips include an excellent lunch and a full day at sea. Unless you wish to charter an entire vessel for your party, there is no need to book. Just show up at the harbour at around 10.00am, find a boat and itinerary that you like the look of, and jump on board. Captains are happy to let you come on board to look at the boat and facilities before you book.

Snorkel gear is provided on most boats free of charge, but it is worth asking before you book.

One of the most popular itineraries from Fethiye harbour is the 12 Islands boat trip. As the name suggests, the itinerary involves plenty of stops and sightseeing. Most operators of this trip stop at Dockyard Island, Red Island, Flat Island, Gocek Island, and Aquarium Bay amongst others. Look out for sea turtles and dolphins, which can sometimes be seen in the waters on the route. Lunch is served around 1pm on most trips, and is a very social affair, with many boats seating all guests around a large table at the back of the boat. Mezes, salads, fish, and/ or meat dishes that are prepared on board are usually served, with a selection of wines, beer, and soft drinks/tea/coffee. Lunch is often a long, lazy and very casual affair, and the boats find the most scenic and calm locations to drop the anchor for the lunch stop.

Most trips start at 10.30am and return to harbour between 4.30 and 5.30pm. Some boats also offer dinner trips, which start early evening, and return around 10pm.

Boats are equipped with toilets, changing facilities, and plenty of space to sunbathe, or relax in the shade. Steps to enter and access the sea are provided, as is a fresh water shower at the entry back onto the boat.

One of the 6 most important cities of ancient Lycia, Pinara is a truly beautiful place, and well worth a visit from nearby Fethiye. The area was settled around the 5th century, probably as a result of the overpopulation of Xanthos. Manecrates, a 4th century historian wrote that the city of Xanthos was split into 3 areas, one of which was Pinara.

In the Xanthos valley, with a backdrop of mountains of fragrant pines, olive trees, and wild flowers, it is a particularly beautiful place to visit in the spring.

The Mountain Cone is the acropolis of Pinara and is over two thousand feet high, towering above the city which stretches out beneath it. It contains several hundred rectangular burial tombs in a honeycomb style layout which have all been carved in the mountains east face.

Pinara was a religious centre dedicated to Aphrodite, Athena and Apollo, and the remains of a number of temples can be seen here. The temple of Aphrodite contains heart shaped columns. These columns, which were built earlier on the front, rear and lateral facades indicate that the site may have been a site of phallic worship. The photo to the right shows you the views you can expect.

There are a large number of tombs that exist within Pinara. These are, on the whole free- standing sarcophagi. One of the most interesting tombs is the "Royal Tomb", constructed for an important ruler, and featuring detailed reliefs depicting scenes of ancient walled cities.

Dating from the 2nd century BC, and accommodating 3200 spectators, the Greek style amphitheatre consists of 27 rows of seating, which are divided into 9 wedge shaped sections. 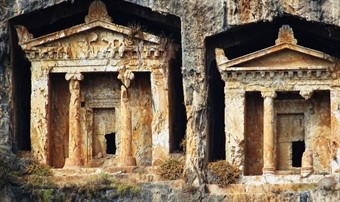 Known as "Tlawa" as evidenced by Lycian inscriptions, it was one of the largest and certainly oldest settlements in Lycia, and was eventually inhabited by the Ottoman Turks right up to the 19th Century.

Charles Fellows famously re-discovered Tlos in 1838, and later on was followed by the explorer Spratt, who proclaimed that "a grander site for a great city could scarcely have been selected in all Lycia."

Tlos is dominated by its acropolis and lies on the east side of the Xanthos valley.

On its slopes are numerous Lycian sarcophagi and several house and temple-type rock-cut tombs cut into the face of the hill. Showing the influences of many different cultures, Tlos now has an interesting collage of structures and architecture. It is a beautiful, some say very romantic place, with many buildings being covered in vines and surrounded by beautiful landscapes.

There are toilet facilities and some small cafes for rest and refreshment stops opposite the acropolis of Tlos.

A large and interesting tomb, of temple type design with an unfinished façade, with a relief in its porch of the Greek legendary hero Bellerophon riding the winged horse Pegasus.

From the Roman period and located just under the Acropolis hill, the stadium originally had seating for 2500 spectators. Only the seating remains today. Granite columns in the immediate area suggest that the structure was originally columned.

Running parallel to the stadium structure is, what is presumed to have been, the building used for the market. It is a large, 2 story building, sitting at 150 metres long and 30 metres wide. Its construction is made up of carefully jointed ashlar masonry.

Tlos has two baths.  The smaller of the two sits right next to the larger bath. The larger bath remains a very impressive structure and comprises three large adjoining rooms of equal dimensions. The most magnificent room is called "Yedi Kapi" (seven gates) in the larger of the two baths and it contains 7 beautiful arches that overlook the valley beyond.  This wonderful room is almost certainly the "exedra" in the baths that Opramoas donated to Tlos.

Dating from the Roman era, and containing 34 rows of seats, the large amphitheatre still has some of the stage building intact, and there are many highly decorated carvings scattered around the site. The famous philanthropist Opramoas made a large donation for the construction of the theatre, along with many others from private citizens, many of which are recorded on an inscription. 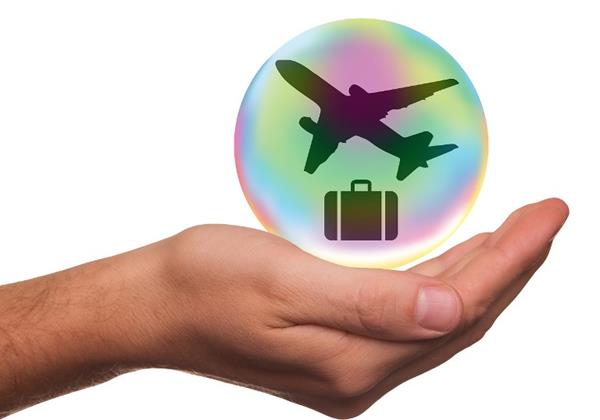 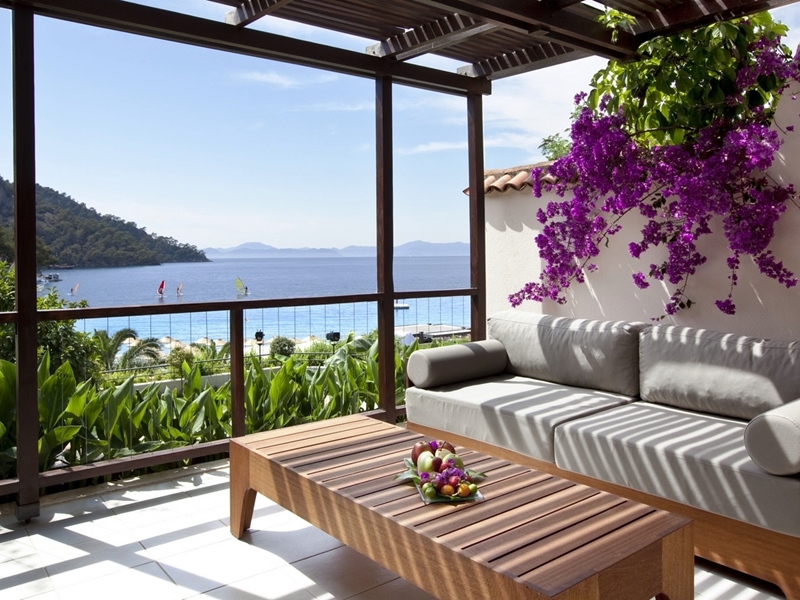 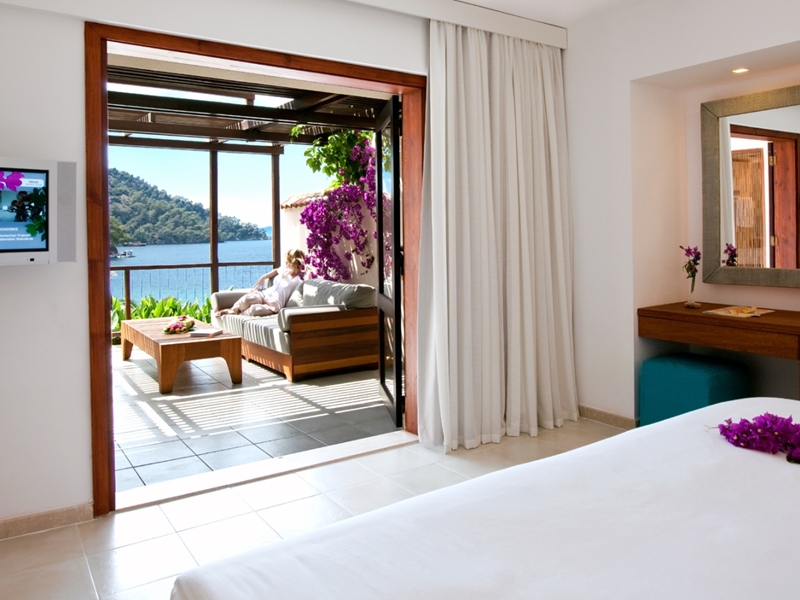 SLEEPS 3 , FROM Prices from £242 per night (based on 2 guests on 'Full board extended' basis)
Hillside Beach Club Hotel, Türkiye
Club Room - Hillside Beach 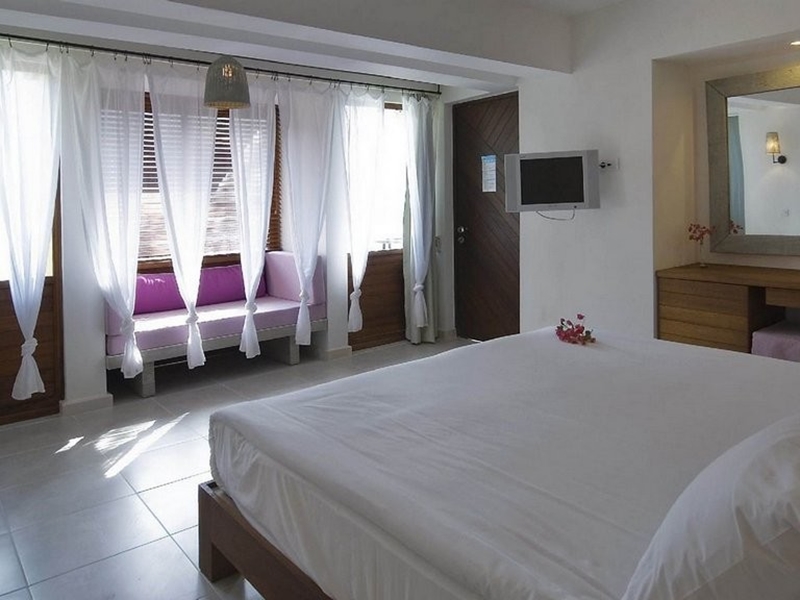 SLEEPS 2 , FROM Prices from £219 per night (based on 2 guests on 'Full board extended' basis)
Hillside Beach Club Hotel, Türkiye